These vast hidden forests under the sea could help save Earth 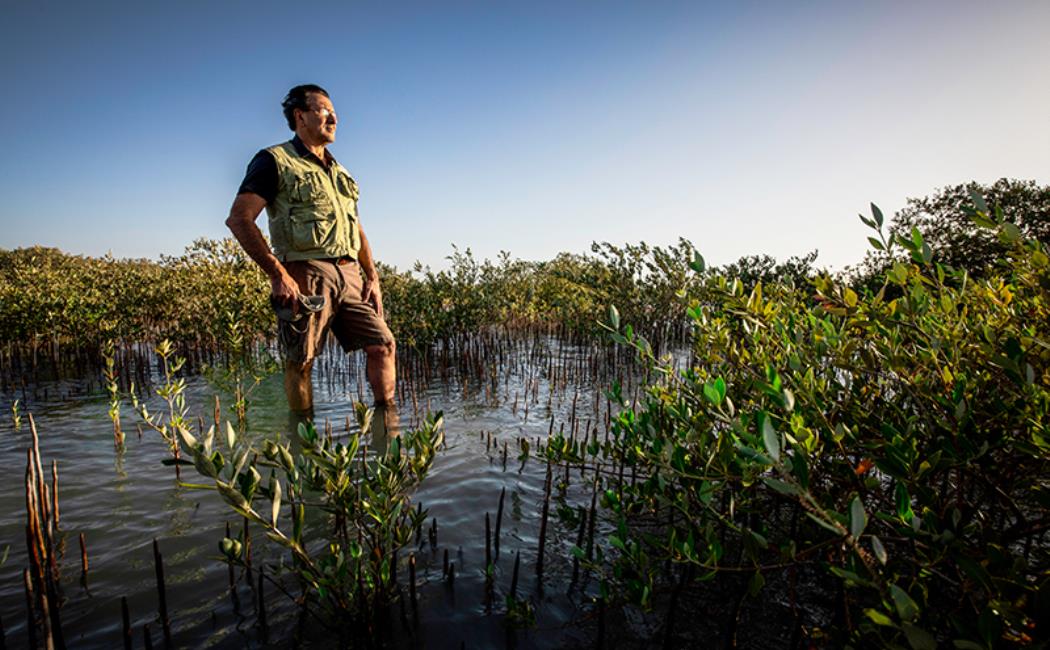 These vast hidden forests under the sea could help save Earth

The epiphany came whilst diving deep in the azure waters off the island of Mallorca. It was 1993, and marine ecologist Carlos Duarte was studying a seagrass called posidonia oceanica, which forms vast underwater meadows in the Mediterranean. The flowering plant—which produces a fruit known in Italy as “the olive of the sea”—is considered the world’s oldest living organism and, over the course of millennia, grows complex reefs that form its anchor.

The reefs are made up of dead plant stems and sediment, and—as the ocean-trotting professor noted—grow in height by no more than a millimeter a year. They resemble clumps of grass-covered earth and, one day, could help actually save Earth.

This was the great revelation as Duarte gazed at a four-meter reef stack under the Med. “It was evident that I was looking at 4,000 years of continuous accumulation of carbon,” he says. “That is remarkable. And it marked a realization of the importance of this particular habitat as a carbon sink.”

Thus begun Duarte’s decades-long study of what was eventually coined “blue carbon”—the removal of carbon dioxide from the atmosphere thanks to ocean ecosystems, primarily mangroves, salt marshes, and seagrasses like posidonia oceanica.

“Save the rainforest” was an early clarion call of environmentalism. The Amazon is big, and you can easily take pictures of it—or, indeed, its destruction. It is trickier to observe underwater habitats and, perhaps as a consequence of that, their preservation has ranked lower down the climate agenda. But they do, in fact, have a bigger impact in mitigating climate change: marine organisms are responsible for 55 percent of all biological carbon captured by photosynthetic activity, while some 93 percent of the world’s CO2 is stored and cycled through the oceans.

Duarte, who is now a professor of marine sciences at KAUST in Saudi Arabia, refers to these marine habitats as “hidden forests.” And a 2005 paper he authored was key in bringing them to light.

“Mangroves, seagrass, and salt marshes have huge stocks of carbon—these habitats are the most intense carbon sinks in the biosphere. One hectare of seagrass or mangrove is equivalent in terms of the carbon-sink capacity to about 15 or 20 hectares of pristine Amazonian forest,” says Duarte. “Yet even though these habitats are really important, they are beyond our sight, and even beyond our imagination. They had been ignored for a long time.”

“There is no silver bullet for solving climate change. So we need to stack a number of solutions. And each of them will have a contribution toward the goal.”

As the 2005 paper noted, such habitats occupy just 0.2 percent of the seafloor, but are responsible for 50 percent of all the carbon sequestered in marine ecosystems. The academic study drew the attention of UN agencies and led to a 2009 paper called the “Blue Carbon Report,” published in conjunction with the United Nations Environment Programme. It coined the term “blue carbon”—further boosting interest in how our vast oceans could help save the planet.

The blue carbon concept has only been applied in depth to seagrass, mangrove, and salt-marsh areas. Combined, these have the potential to contribute to around 2 percent of the carbon-emissions reductions required under the Paris Agreement, Duarte estimates. But expanding the potential of blue carbon to other areas could increase that to 10 percent.

“There is no silver bullet for solving climate change—there’s no single solution that is going to meet the targets laid out by the Paris Agreement. So we need to stack a number of solutions. And each of them will have a contribution toward the goal,” says Duarte.

The importance of wild and farmed seaweed—which could be used for human food and other products—has been a focus of Duarte’s work at KAUST. In one study he led, it was found that seaweed has a greater role in mitigating greenhouse gases than previously thought. The research, published in 2019, found that seaweed can drift as much as 5,000 kilometers beyond coastal areas, with around 70 percent of it sinking to ocean depths below 1,000 meters—which means that the carbon stored in it will be unlikely to return to the atmosphere. The researchers called on seaweed to be included in measurements of blue carbon.

Bigger challenges remain, however, in giving blue carbon a boost. Duarte says incentives are needed to, for example, expedite restoration efforts, or to encourage farmers to feed seaweed to their cattle. He led a paper published in April in the scientific journal Nature, which said it is possible to restore the abundance of marine life by 2050 and provided a roadmap to achieve this.

“The next big effort is to set up global goals, not just local goals, for restoration, to be able to map out what are the restoration options that are available, and then work collaboratively globally to make sure that every option to expand these blue carbon ecosystems is used,” he says. “The climate benefits are benefits to all.” There has, however, already been a clear shift toward preserving marine habitats. Duarte once termed seagrass meadows the “ugly ducklings” of marine conservation, because their role in mitigating climate change was so overlooked. Thirty years after that dive in the Mediterranean, a prettier picture is emerging from the deep. 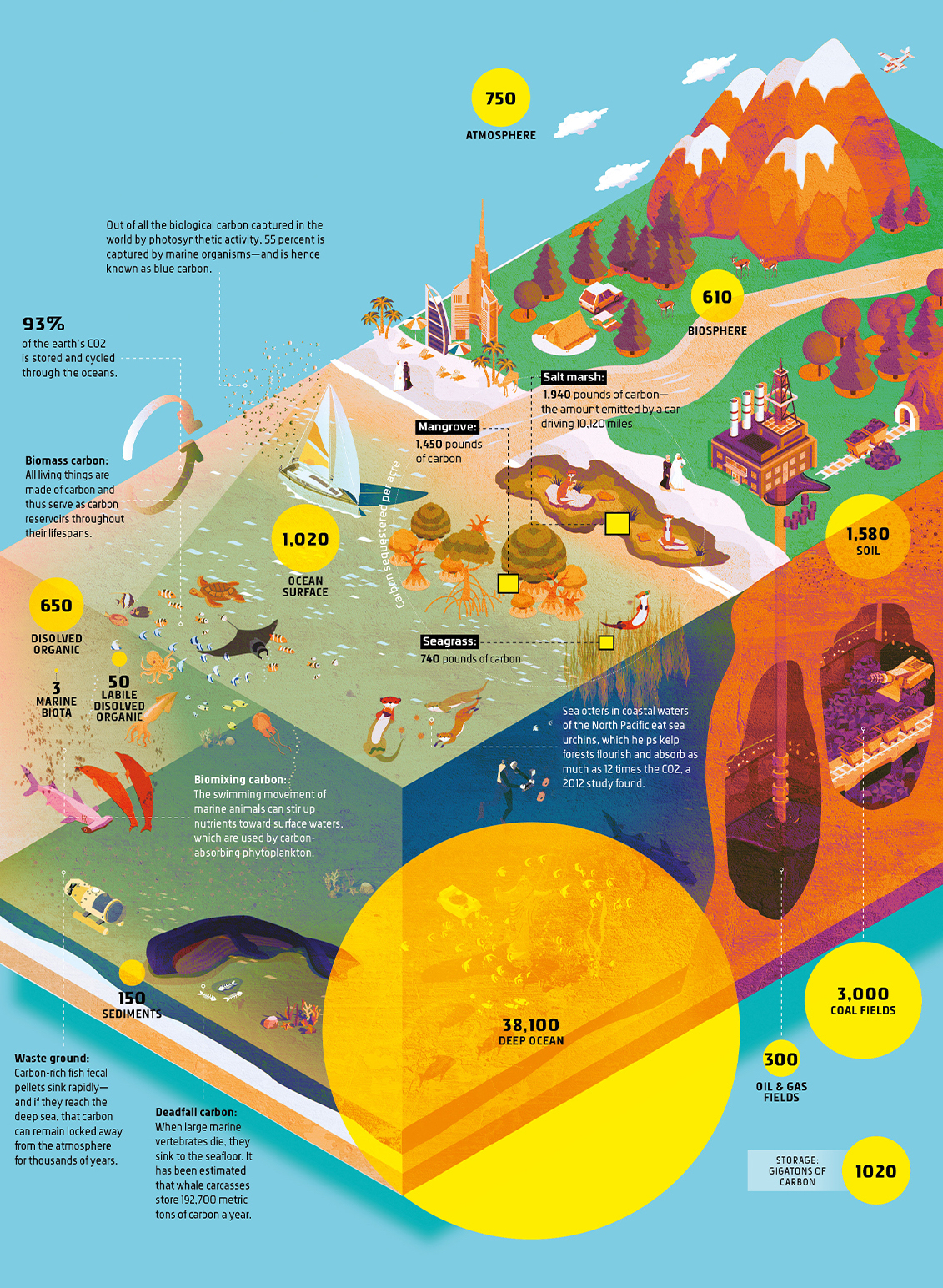 The climate on campus

How the King Abdullah University of Science and Technology is bringing green tech from the lab into the real world.

Carbon capture, windows that generate power, and self-cleaning solar panels—such technologies are advancing in leaps and bounds in university labs across the world. But the danger is that they’ll stay there.

It’s a concern that keeps Kevin Cullen awake at night. As vice president of innovation and economic development at the King Abdullah University of Science and Technology (KAUST) in Saudi Arabia, it’s his job to make sure the institution’s research gets put to best use.

“An average of 11 articles are published annually per KAUST faculty—the highest number of all universities.”

With academia offering rare rays of hope in the midst of the greatest challenge to face mankind—the prospect of an environmental catastrophe—you’d think this would be fairly straightforward. But in the wider academic world, the technology transfer model is broken, says Cullen.

“Most universities around the world have gone down a cul-de-sac in terms of commercialization,” he says.

The biggest house on this road represents universities’ habit of measuring success in terms of the number of patents filed. Cullen likens this to a “stamp-collection competition”—and a particularly unprofitable one at that. Universities will, on average, license only 25 percent of their invention disclosures. Of these, only 5 percent will monetize and only 0.5 percent will ever generate over $1 million.

“That means, in order to generate $1 million, you need 200 patents, on average. The typical cost of filing and maintaining 200 patents is about $1 million… the numbers just do not add up,” says Cullen. “The people who make a lot of money are patent attorneys and lawyers.” 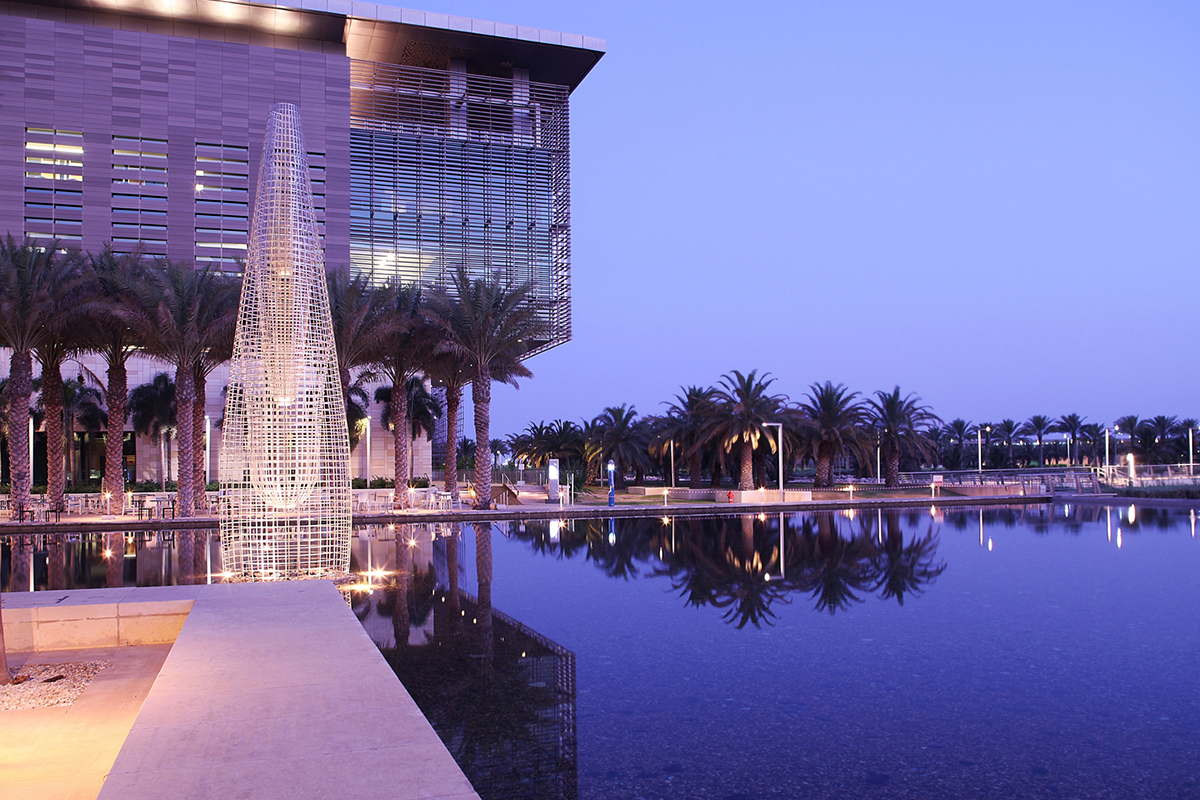 Another pitfall is universities assuming they’re sitting on a research goldmine. Cullen points to just a handful of university-born commercialization that hit the big leagues, such as Northwestern University’s $700 million in royalties for painkiller drug Lyrica.

But aiming for such big-shot winners is unrealistic, Cullen says. “It’s like seeing a lottery winner on the television and saying, ‘oh, I’m going to do that’… The vast majority of university intellectual property does not have any, or significant, commercial value.” Despite this, Cullen says 16 KAUST-originated patents were licensed last year, more than in the previous 10 years combined. But still, the intellectual property typically accounts for a tiny proportion of a university’s revenue—with training and research partnerships usually accounting for the majority.

To encourage the latter, KAUST has formed initiatives such as a translational research fund, which is aimed at moving research from lab-scale proof-of-concept to commercial viability. There’s also the Innovation Fund, KAUST’s venture capital arm, which invests in early-stage startups either based at the university or interested in establishing research and development activities there. This reflects the wealth of research coming from KAUST: an average of 11 articles are published annually per faculty—the highest number globally.

Despite many startups having sprung out of KAUST—including several in sustainability and environmentalism—Cullen says the entrepreneurial route is not right for all academics.

“If you speak to 100 academics and ask them, ‘would you like to commercialize your intellectual property?’ Then roughly 100 would say ‘no—I’m here to do research, I have students to teach, and publications to write’,” he says. “But if you ask those same 100 academics ‘would you like to meet someone who’s interested in your research?’, you’ll get a 100 percent positive reaction.

This tallies with Cullen’s broader aim of finding people that KAUST academics can actually work within the real world. “It’s once people get to know each other that you get the sparks,” he says. “Together, they’ll go and change the world.”