Marine life can be rebuilt by 2050

Marine life can be rebuilt by 2050

An international study recently published in the journal Nature that was led by KAUST Professors of Marine Science Carlos Duarte and Susana Agustí lays out the roadmap of actions required for the planet's marine life to recover to full abundance by 2050.

"We are at a point where we can choose between a legacy of a resilient and vibrant ocean or an irreversibly disrupted ocean," said Duarte, who is also the Tarek Ahmed Juffali research chair in Red Sea ecology.

We spoke with Carlos Duarte for a bonus episode of Sciencetown - The science of making cow farts less unpleasant (for the planet).

Although humans have greatly altered marine life to its detriment in the past, the researchers found evidence of the remarkable resilience of marine life and an emerging shift from steep losses of life throughout the 20th century to a slowing down of losses—and in some instances even recovery—over the first two decades of the 21st century.

The evidence—along with particularly spectacular cases of recovery, such as the example of humpback whales—highlights that the abundance of marine life can be restored, enabling a more sustainable, ocean-based economy.

The review states that the recovery rate of marine life can be accelerated to achieve substantial recovery within two to three decades for most components of marine ecosystems, provided that climate change is tackled and efficient interventions are deployed at large scale.

The actions recommended include opportunities, benefits, possible roadblocks and remedial actions, giving a tangible roadmap to deliver a healthy ocean that would provide huge benefits for people and the planet. 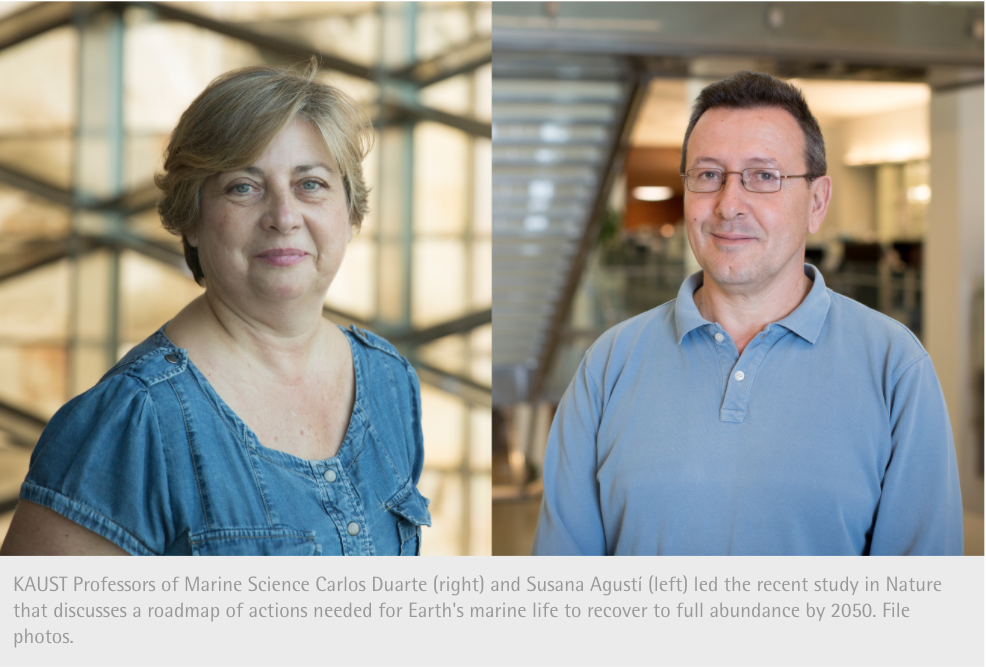 If all recovery wedges are activated at scale, recovery timescales of previously damaged marine life show that the abundance of marine life can be recovered within one human generation, or two to three decades, by 2050.

A key element identified for success is the mitigation of climate change by reducing global greenhouse gas emissions. Impacts from realized and unavoidable climate change already limit the scope for rebuilding tropical corals to a partial—rather than substantial—recovery. The goal of rebuilding the abundance of marine life can only succeed if the most ambitious goals within the Paris Agreement are reached.

Success largely depends on the support of a committed, resilient global partnership of governments and societies aligned with the goal. It will also require a substantial commitment of financial resources, but the study reveals that the ecological, economic and social gains from rebuilding marine life will be far-reaching.

The review is timely, as nations consider their actions to conserve biodiversity beyond 2020 and as the Kingdom leads its G20 partners as the group's 2020 president into novel, pragmatic approaches to tackling the climate challenge and protecting coral reefs and other vulnerable marine ecosystems.

"We have a narrow window of opportunity to deliver a healthy ocean to our grandchildren's generation, and we have the knowledge and tools to do so. Failing to embrace this challenge—and in so doing condemning our grandchildren to a broken ocean unable to support high-quality livelihoods—is not an option," Duarte said.